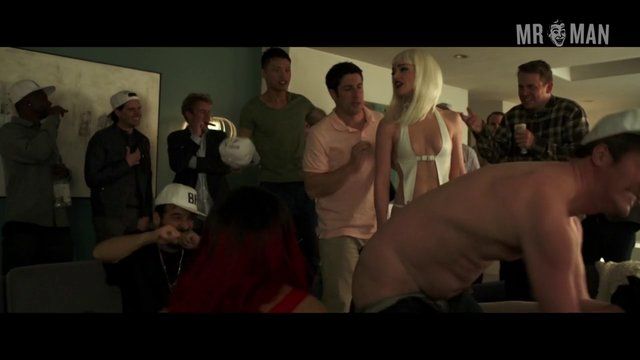 Amateur Night (2016) is about Guy Carter played by the handsome Jason Biggs, an award winning architect with the seemingly perfect life. What's the problem? He doesn't feel perfect. He feels like he isn't a good father and he has no luck with his job, so he finds a job on Craigslist as a "driver" which ends up being a driving job for prostitutes. He meets Nikki played by Janet Montgomery, the rough-around-the-edges prostitute, and her friends who get him into crazy adventures that show him he definitely has what it takes to get the life he wants.

Nothing is amateur about the buns of steel on Steven Weber in his thong as he stands on a bed doing some kinky S&M as Janet Montgomery is all tied up. What a wild scene! That's not the only pair of buns - a party guest (David J. Phillips) at the bachelor party spins around and gets his tight ass spanked.