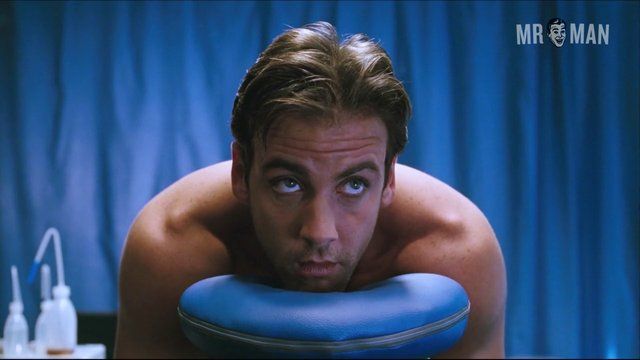 Deuce Bigalow: European Gigolo (2005)
Sexy, shirtless Talk about something we'd like to Ponce on! Watch Carlos show off his hot body while only wearing a towel before assuming a suggestive position.
advertisement

The late great Roger Ebert was not one to mince words, and he was clear and on point when he reviewed Deuce Bigalow: European Gigolo (2005). Some controversy arose when the film’s star Rob Schneider had complained publically about another critic who poorly reviewed the film. Schneider’s claim was that this critic, not possessing a Pulitzer Prize, had no right to comment on what was good or bad. Ebert’s response was to address Rob directly in the end of his review saying, “Speaking in my official capacity as a Pulitzer Prize winner, Mr. Schneider, your movie sucks.” That said, the film is fun and harmless overall, and if you want to watch a Rob Schneider comedy, the sequel to Deuce Bigalow: Male Gigolo (1999) no less, then you likely know exactly what you’re getting in to. And as it turns out, a film following a group of European gigolos is a great place for some tasty man-meat. Some steamy scenes include the ruggedly ripped Kostas Sommer stripping on stage with a big beautiful bulge. The dark-haired, strong-jawed Alex Dimitriades is seen in a thirst-creating thong. A shirtless Carlos Ponce and a pantsless Hilton Myburgh round out this marching myriad of marvelously model-type men. And for those that love a funny man, the Schneider-man himself is seen in nothing but a diaper. It’s a great film for those who like their Deuce with plenty of caboose.