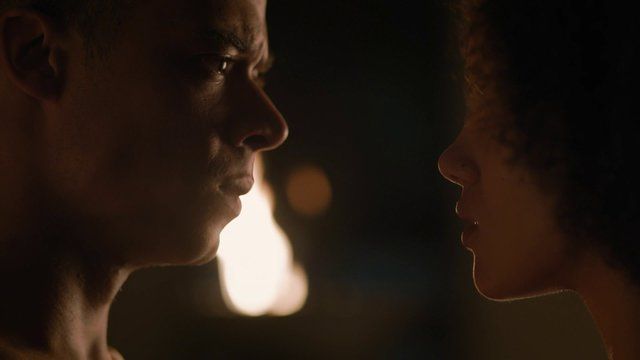 Game of Thrones (2011-)
Nude, butt, straight, shirtless Ep. 07x02 | 00:29:47 Jacob Anderson bares his butt for the first time as he gets it on with Nathalie Emmanuel.
advertisement

Jacob Anderson is a sexy British newcomer who has moved up from one-time gigs on UK television shows like Skins, Injustice and Outnumbered to his first long-term recurring role on Game of Thrones as Grey Worm, the leader of the Unsullied. He's also known for his stage presence in various plays including Dunsinane, King Lear, and War Horse. As sexy as Jacob is to his fans, he wasn’t really keen to show much skin on-screen, but eventually temptation got the best of him and he finally revealed his sexy ass in a steamy sex scene. We really hope he's just getting started. After all, he can't just leave us with one small clip of that delicious derrière. He is pretty dedicated to his solo music career across the pond as well, but we suggest he keeps his focus on his day job - we know we will.