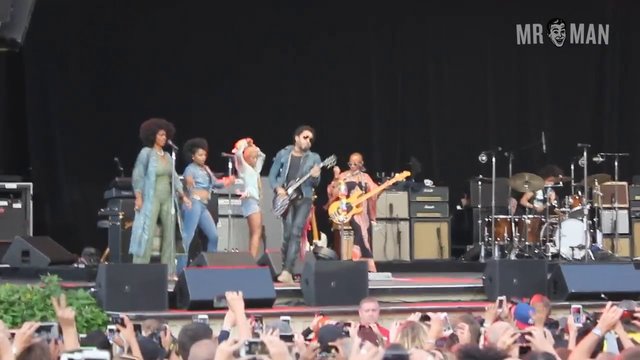 American Woman (Live at Gröna Lund, Stockholm) (2015)
Nude, penis Lenny Kravitz rips his pants onstage, and his ring-wearing cock flops out for all to see!
advertisement

No name is synonymous with timeless sexiness quite like Lenny Kravitz. The rocker has managed to stay on top through the decades and seems to only get better with age. Kravitz was a Billboard chart and music award show staple in the 1990’s and 2000’s, winning four Grammy awards between the years of 1999 and 2002. As if dominating the charts wasn’t enough, Lenny has been able to seamlessly transition to acting, and is possibly best known for his role as the lovable Cinna in the blockbuster Hunger Games franchise.

While all of this is well and good – some awards here, some blockbusters there – Lenny is on Mr. Man for a reason more important that all of his accomplishments combined. In one of the most talked about moments of 2015, Lenny Kravitz accidentally exposed his penis and balls while performing on stage for his American Woman (Live at Gröna Lund, Stockholm) (2015) tour. In addition to having the sizable penis that we had hoped for, Lenny dons a cock piercing, making this is a can’t miss nude celeb moment. Keep on rocking out with that cock out, Lenny!

7 Pics & 1 Clip
Nude, penis Lenny Kravitz rips his pants onstage, and his ring-wearing cock flops out for all to see!