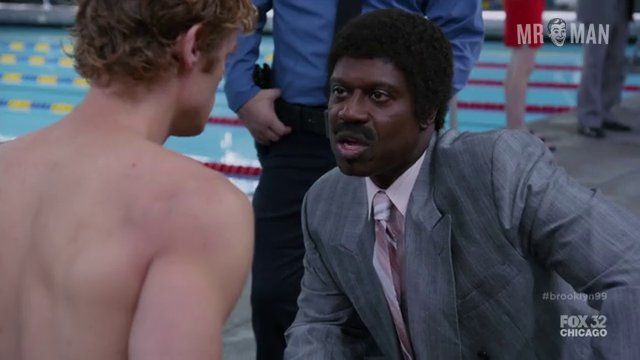 Brooklyn Nine-Nine (2013-)
Sexy, shirtless, bathing suit Ep. 01x11 Brendan sports a pair of Speedos while being confronted by a cop.

When Brendan Norman is not furthering his modeling career, the blonde hair, blue eyed hunk is contributing his good looks to innocuous roles on boob tube shows like Smosh (2010), Make Love Not War (2011), The Bay, and True Blood. You know Brendan must be hot to be on the HBO vampire drama! Brendan has had some equally small roles on the big screen, portraying a sailor in the hit film The Master (2012). We love seamen! He was also in the sexy drama Ashley (2013), and he was a party dude in The Black Out (2013). In the comedy crime series Brooklyn Nine-Nine, we finally got to see some goods from the hunky model. Brendan is handcuffed while modeling a pair of blue Speedos. Mr. Man would love to sk-interrogate Brendan!