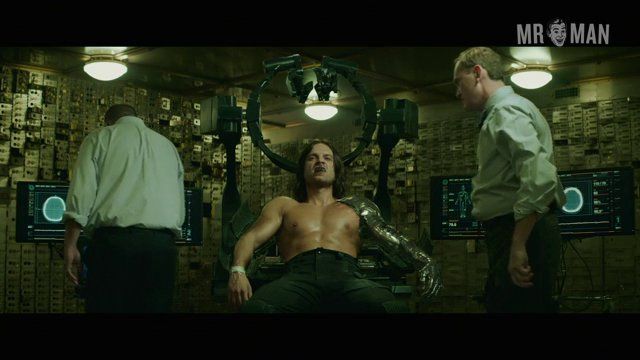 Captain America: The Winter Soldier (2014)
Sexy, shirtless 01:29:47 Sebastian gets strapped down for some horrible experiment. All his pain is our pleasure, because we get a great look at his sexy body.

In the sequel to Captain America: The First Avenger (2011), Captain America: The Winter Soldier (2014) follows Steve Rogers (Chris Evans), the titular superhero, as he tries to adapt to a quiet and normal life in Washington D.C., adjusting to the modern world. But when S.H.I.E.L.D. member Nick Fury (Samuel L. Jackson) comes under attack, Steve must suit up and join forces with Natasha Romanoff (Scarlett Johansson), aka Black Widow, to go deep into a web of intrigue and conspiracy that sees the world at the doorstep of eminent doom. When the full scope of the villainous plot unravels, Cap and Widow enlist the help of Sam Wilson (Anthony Mackie), aka Falcon. The shit really hits the fan when the super trio must do battle with the bad ass Winter Soldier (Sebastian Stan). Since the flick is PG-13, don’t expect much skin. Sebastian Stan shares a look at his manly upper body while strap to a table and being experimented on. That will put a tingle in your soldier!