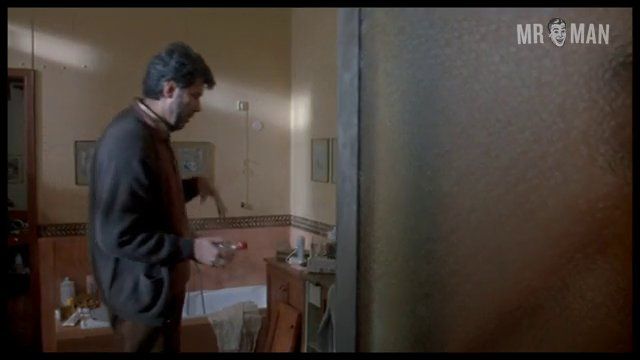 Maniaci sentimentali (1994)
Sexy, underwear, shirtless 00:30:10 Ricky strips down to his big ol' boxer shorts, showing off his hot upper body before heading to the shower.
advertisement

Italian actor and film director Ricky Tognazzi has been in the entertainment business for five decades. Thanks to the power of films, we’ve had the shear pleasure of watching Ricky mature on camera. Ricky showed off his youthful hotness in the films Son contento (1983), Blood Ties (1986), The Family (1987), and Goodbye and Thank You (1988). Unfortunately Ricky never wowed us with nudity in his early roles, but once the maturing grey hair creeped in and his tender physique transformed into a manly mass of sexiness, the steamy stud teased us with a look at his banging body. In the 1994 comedy Maniaci sentimentali, Ricky showed off his boxer short-clad physique while babbling with his buddy and getting ready to hit the shower. When he shucks his shorts, the camera unfortunately never allows us a look at his good parts, but there’s enough flesh to fulfill the dirtiest of minds! A shirtless Ricky will make you sticky!