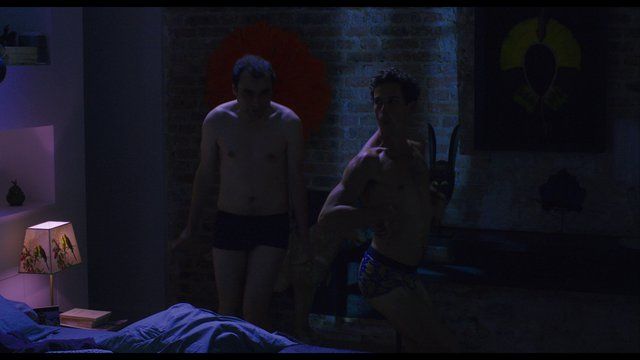 To Each, Her Own (2018)
Sexy, underwear, shirtless 00:57:34 Lionel and David do some creative foreplay by pretending to be birds as they flap around in their underwear and make bird calls. Whatever gets your pecker hard!
advertisement

You could say French actor David Houri has had two different acting careers. His professional career actually started in the early 1990’s when he was a child and appeared in a few movies and TV shows. In the early 2000’s he took nearly a decade off to grow up, be a kid, and enjoy his life then once he was an adult he got back into the business, dedicating himself to acting full time once again. Seeing David in just his underwear in To Each, Her Own (2018) may lead to you have two different orgasms as his tight body looks great while he and another guy dance and move around a room in just their underwear. As he moves, David gives us a very good look at his upper body and we even can see the outline of his bulge in his underwear.