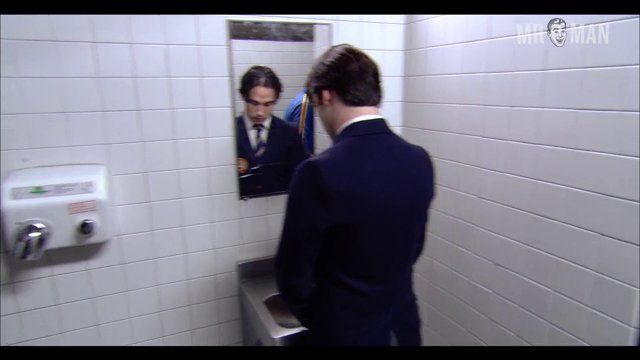 Another Gay Movie (2006)
Nude, butt, gay 01:11:24 Dressed as a boyscout, we get a look at Eric's butt as he gets blown by a priest in a bathroom stall. This is my kind of confessional!

Eric Eisenbrey must like to push buttons. The actor plays a Boy Scout in Another Gay Movie (2006) who pulls his pants down for a priest. It's a comedy, but that's some dark chocolate. While the man of God gets to see Eric's manhood, we in the audience are treated to his butt, which deserves a merit badge of some sorts. He also appeared in the spoofy sequel, aptly entitled Another Gay Sequel: Gays Gone Wild! (2008), where he plays a Gay Nerd. It's not as dangerous a performance, but we'll let Eric push our buttons any time.