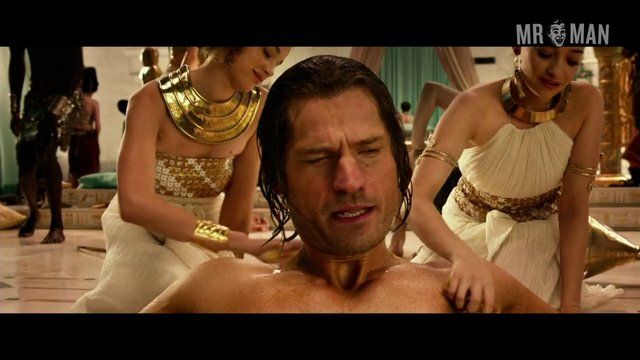 Gods of Egypt (2016)
Sexy, shirtless 00:04:17 A larger than life Nikolaj Coster-Waldau looks "splendid" while waking up shirtless to his opulent lifestyle. He then undresses for the tub, but keeps it covered.
advertisement

Gods of Egypt (2016) is a big budget reimagining of the time of the ancient Egyptians. In director Alex Proyas’ world, gods are physically larger than mortals and, in the style of Transformers, can morph into their alternate form at any given time. We find the disorienting CGI kingdom as the evil Set (Gerard Butler) dethrones the king of Egypt to become ruler. The only hope against his tyrannical ways is a mortal Bek (Brenton Thwaites) and the god Horus (Nikolaj Coster-Waldau). The unlikely duo (Horus is used to thinking of humans as less than, but partnering with Bek helps him understand that this is not the case) must face grave danger before they are eventually able to reclaim the throne from Set. You’ll be the Wads of Egypt when you see the shirtless action from Nikolaj, and Gerard!