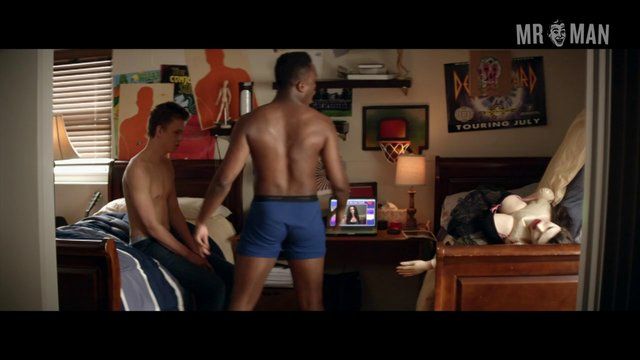 Laid in America (2016)
Sexy, underwear, shirtless, bulge 00:02:00 Caspar and Olajide are shirtless while both tag teaming a blow up doll! Lucky girl.
advertisement

On their last night in America, two foreign exchange students vow to get laid in the comedy Laid in America (2016). After a year of studying in the United States and having no luck with the girls, the two guys pull out all the stops to hook up only to find themselves getting kidnapped and having to fight a whole different battle.

Olajide Olatunji and Casper Lee play the two students and we see plenty of them without their clothes on. Olajide ends up on a bed in just his boxers as a girl undresses in front of him. Casper has some luck and ends up in bed with a woman. She takes off his shirt, letting us check out his nice upper body. Both guys end up wearing nothing but capes and their boxers as they argue about doing coke. Olajide sports an impressive prosthetic boner as they discuss the situation. Daved Wilkins kicks back on the couch wearing a mask and dressed like a king. As he walks across the room his robe comes open and we see his nice, hairy chest. Rounding out the skin tour is Bobby Lee who plays a game with the guys while his shirt is unbuttoned letting us check out his smooth, hairless chest as he messes with the duo.