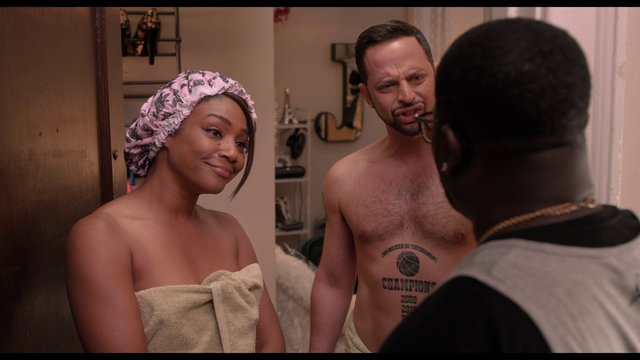 Uncle Drew (2018) is a comedy directed by Charles Stone III and starring Lil Rel Howery, Kyrie Irving, and Shaquille O’Neal. The film follows Dax, a basketball player who puts all his money into entering a street ball tournament in Harlem when he loses his team (and his girl). Dax then recruits some retired players (played by real basketball players in old man makeup) to help him win. Beefy babe Shaquille O’Neal brings the booty for this comedy. We get a quick but satisfying look at Shaquille shaking his delicious donk while celebrating in an open hospital gown. Cute comedian Nick Kroll gets shirtless and sexy when he answers the door while wearing just a towel wrapped around his waist. We can’t get enough of these babe-alicious ballers!