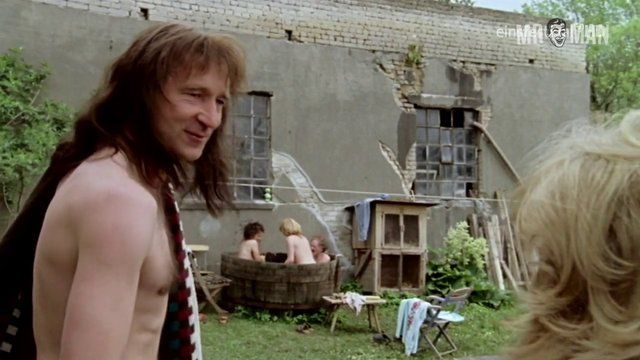 Am Tag als Bobby Ewing starb (2005)
Nude, butt, penis, balls, shirtless The long haired Peter Lohmeyer gets some penis stares while letting it all hang out. Hey, his eyes are up here!
advertisement

Did we mention that we love German movies? The country that appreciates dudity as much as Mr. Man is at it again with Am Tag als Bobby Ewing starb (2005). This time using a very liberal hippie commune as the backdrop for dong, the plot finds a 17-year-old boy moving away from home with his recently separated mother. After landing at the commune, Mom falls for camp leader Peter (Peter Lohmeyer), while her son rebels in the form of a relationship with the rightwing mayor’s daughter. As you can probably guess, these hippies don’t mind getting strippie, and in one outdoor scene you can catch major frontal from Lohmeyer!