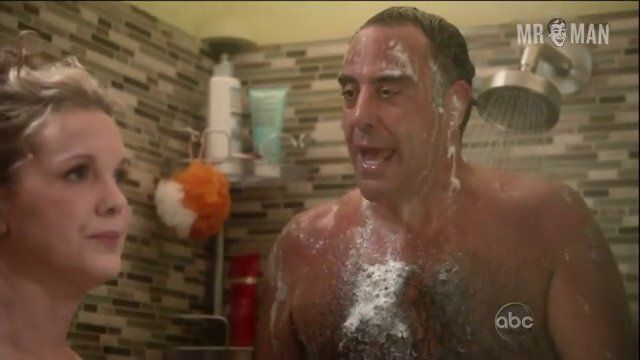 How to Live with Your Parents (For the Rest of Your Life) (2013)
Sexy, shirtless Brad Garrett showers and shows off his hairy chest.

If you like your guys tall and funny, Brad Garrett is the dude for you! Coming in at an unofficial six-foot eight inches, Brad is a tall glass of man! Brad got his start as a stand up comedian before Hollywood took advantage of his deep and unique voice. Geeks around the world know the funnyman intimately as the voice of Trypticon on the classic 80s animated series The Transformers. Brad has lent his voice to cartoons like Where’s Waldo, Bonkers, 2 Stupid Dogs, Biker Mice from Mars, and Hercules. Of course Brad’s most known for his hilarious role as the joke-filled sportswriter Raymond Barone in the hit comedy Everybody Loves Raymond. The handsome comedian hit sitcom gold again with ‘Til Death and, more currently on the way-too-long-of-a-title-for-a-show, How to Live with Your Parents (For the Rest of Your Life). The title may be long, but Brad shows off his hairy chest while taking a shower. Now that’s my kind of TV! Let’s hope that Brad considers taking a role as a phone sex operator. Hearing his voice whisper perverted nothings in our ear would be heavenly bliss. How ‘bout it, Brad? Reach out so we can touch ourselves to your booming voice!