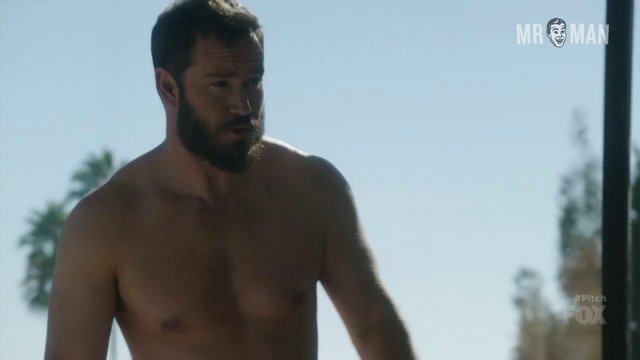 Pitch (2016)
Sexy, underwear, shirtless Ep. 01x04 | 00:02:10 Now that is one tall drink of water! A bearded Mark-Paul Gosselaar shows off his amazing bod while talking to Ali.
advertisement

Pitch is an American drama which premiered on Fox in September of 2016. The series was created by Dan Fogelman and Rick Singer and stars Kylie Bunbury, Mark-Paul Gosselaar, Mark Consuelos, and Mo McRae. The series follows Ginny Baker, a rookie pitcher with an amazing screwball pitch, who becomes the fist woman to play Major League Baseball when she is recruited to play for the San Diego Padres. We get some major league sexiness in the series from the mesmerizing Mark-Paul Gosselaar. In an episode called “The Break,” Mark-Paul breaks all of our hearts by appearing in his underwear and putting his pants back on! However, we still get a great look at Mark-Paul’s bulging biceps and chiseled chest! Mark-Paul’s delicious naked body makes Pitch a homerun!