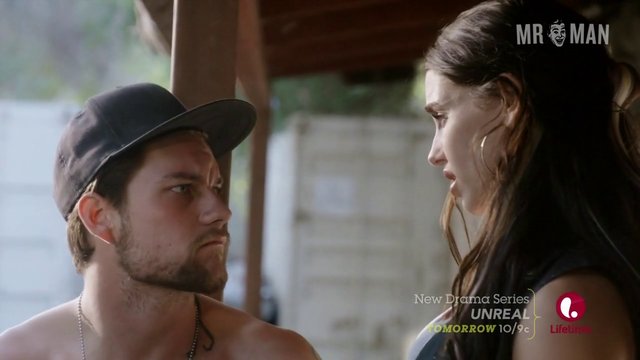 A Deadly Adoption (2015)
Sexy, shirtless 00:54:15 Jake sits outside a cabin, smoking a cigarette without a shirt on!
advertisement

A Deadly Adoption (2015), the once secret Lifetime movie project starring SNL alums Will Ferrell and Kristen Wiig, is not so much a parody as it is a sincere tribute to the most reoccurring hallmarks of the network's 25 year output. The story plays like a textbook of the genre, with Ferrell and Wiig portraying a married couple who unwittingly open their door to a sinister birth mother (Jessica Lowndes), threatening their marriage and their lives. While this may go down as one of the biggest head scratchers of the comic superstars' careers, it does act as a cheeky showcase for its young less recognizable talent - specifically Lowndes and her boyfriend played by actor/musician Jake Weary (It Follows), who goes shirtless. A little less than an hour in we see Jake outside a log cabin, bare chested and covered in presumably fake tattoos. He stands up and gives us a clearer look at his lean torso. Hopefully he adopts this wardrobe for future roles!