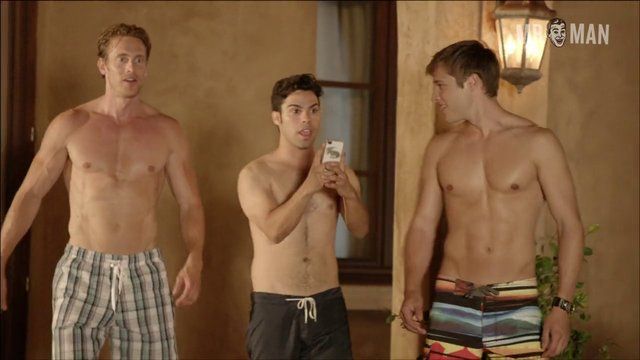 American Beach House (2015)
Sexy, shirtless, bathing suit Tim Parrish, Martin Belmana, and Jim Poole head out to the pool in their trunks, making us wish we were there to join in on the fun!
advertisement

American Beach House (2015) is a comedy that parodies reality shows. In this case the show revolves around six people, three guys and three girls, who all get a free, all expenses paid, vacation in a Malibu beach house. The catch is that they will all have to live in the house at the same time and have it all filmed. Hilarity and nudity commence.

Things get a little gross, but hot in the bathroom when Tim Parrish and Martin Belmana find themselves in a bathroom with explosive diarrhea. We see Tim’s stomach then Martin’s naked body as he strips down on the toilet. As he sits he flashes a bit of dick and balls so be ready with the pause. A little later Tim and Martin are joined by Jim Poole for a sexy pool party. The guys come out of the house in just their trunks letting us check out their ripped, tight bodies.