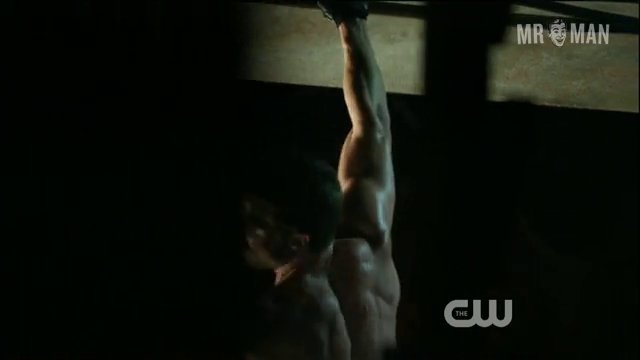 Arrow (2012-2018)
Sexy, shirtless Ep. 01x18 A sweaty and shirtless Stephen shows off his extreme workouts and his extreme abs. Hey, being a superhero isn't easy!

Based on the DC Comics’ costumed crime-fighter Green Arrow, the television hit Arrow follows the exploits of Oliver Queen (Stephen Amell), a billionaire playboy who gets stranded on a mysterious island for five years following a shipwreck that claimed the lives of his mistress and father. When Oliver makes it back to his home in Starling City, the handsome hero vows to follow his father’s dying wishes to right the wrongs of the Queen family and help return his hometown to its former glory. Oliver works on his fitness, dons a green hood and a snarl to become the bow and arrow-slaying vigilante Green Arrow. When the costumed cutie begins to leave behind a trail of dead bodies full of arrows, he catches the eye and disdain of police detective Quentin Lance (Paul Blackthorne), father of Oliver’s ex-girlfriend Laurel (Katie Cassidy). While running from the police, cleaning up the city, and looking downright sexy, Oliver begins to form alliances and come to terms with what actually happened to him on the island. Stephen steams up prime time television with his grade A beefcake. Throughout the series, Stephen is often shirtless, doing some intense workouts that showcase his chiseled chest and abs. This sexy superhero will have you quivering in your underwear!