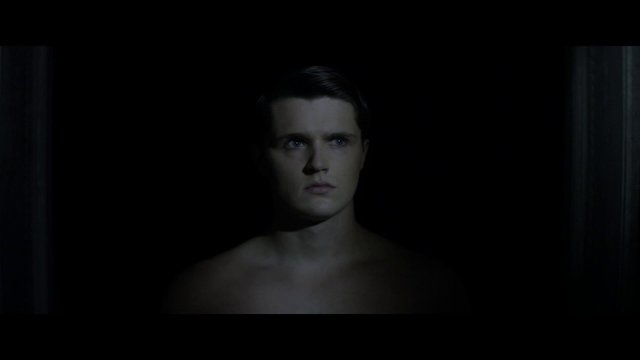 The Lodgers (2017)
Nude, butt 01:01:48 Eugene slowly walks up steps in the nude, his ass shining through the shadows. It's visual poetry!
advertisement

Blue-eyed hunk Eugene Simon mixes dashing, leading man good looks with an eternally youthful attitude. You could eat dinner off of his cheekbones, and it might be dangerous to gaze directly at his smoldering stare, but his unassuming demeanor makes the stud feel approachable.  Eugene first received widespread name recognition with his staring role in the Nickelodeon show House of Anubis. He graduated to the big boy league shortly after by landing a spot on HBO sex powerhouse, Game of Thrones. Unfortunately the British hunk is not one of the men who shows us his humps, and for now we’ll have to settle for his sexy shirtless shots in thriller, Eden (2015). While the premise of the movie – a men’s soccer team is marooned on a deserted island – is enough to get us damp, we especially loved seeing his bum in The Lodgers (2017). Still, it isn't enough. What we’d really like is to see some Eugene peen in the near future!

3 Pics & 1 Clip
Nude, butt 01:01:48 Eugene slowly walks up steps in the nude, his ass shining through the shadows. It's visual poetry!