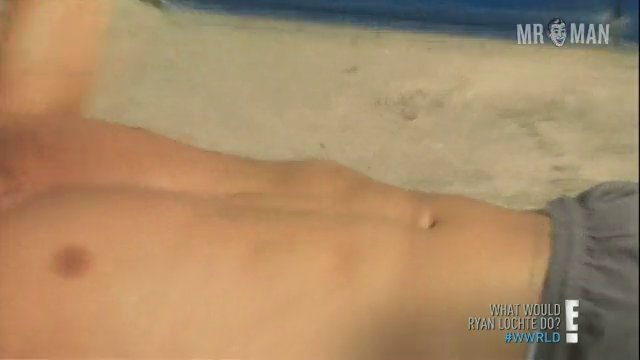 What Would Ryan Lochte Do? (2013)
Sexy, shirtless, bathing suit Ep. 01x01 Ryan works on his abs before donning a Speedo and going for a dip. Dry or wet, Ryan sure is sweet!

Ryan Lochte is a competitive swimmer and an eleven-time Olympic medalist who earned reality show gold by scoring his own series on the E!, What Would Ryan Lochte Do? To answer the question posed by the show’s title---Who cares! As long as Ryan doesn’t wear a shirt, he can do whatever he damn well pleases! The series follows Ryan as he trains for future swimming events, spends time with his friends and family, and tries to find a girl worthy of his time. Though the show has been banished to the reality show dung heap, the eight existing episode harvested some golden shots of the tall, statuesque, and overly handsome swimmer in his Speedos and his underwear. If the whole Olympic swimmer thing doesn’t work out, Ryan won’t have a problem getting work as an underwear model! It looks like we’re the winners in this situation. Ryan will have your hands doing the butterfly stroke over your groin!