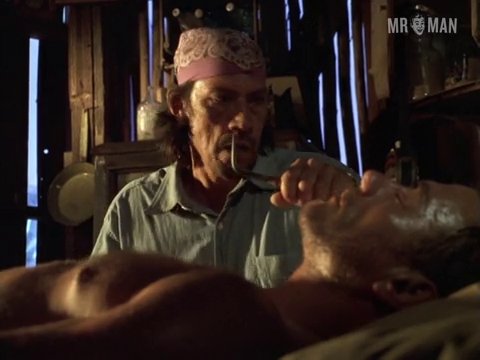 Desert Heat (1999)
Sexy, shirtless, bulge 00:17:00 It's the ol' remove-the-bullet-from-the-wounded-dude scene. There's some quick bulge at the beginning of the scene from Jean-Claude.

Jean Claude Van Damme plays a leather-clad biker badass with a wish in the direct-to-video action flick Desert Heat (1999). Loosely based on Yojimbo (1961) and A Fist Full of Dollars (1964), John G. Avildsen’s film tells of Eddie Lomax (Van Damme), a suicidal wanderer who decides to put off his date with death when he learns that a drug cartel has been harassing the local female population. The muscle-bound martial-arts specialist quickly leaps into action, busting bad guys with roundhouse kicks and semi-automatic firepower. When he’s not offing do-badders, the vigilante takes time to make time with the local ladies. In a game of I’ll-show-you-mine-if-you-show-me-yours with a desert whore, the Belgian beefcake drops his towel and shows his gym-sculpted backside that looks like it belongs in a museum, not in a cheap action film. The "Muscles from Brussels" never fails to bring the heat.