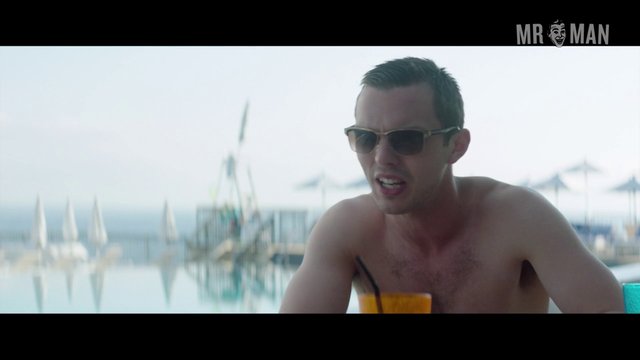 Kill Your Friends (2015)
Sexy, shirtless, bathing suit, bulge Nicholas Hoult has one of the sexiest lean bods in the biz, and doesn't mind showing it off as he dives into the pool in only some tight Speedos!
advertisement

Black comedy Kill Your Friends (2016) follows rocker-turned-murderer Stelfox (Nicholas Hoult) as he navigates the 1997 British music industry. This time capsule of a movie hits on everything that made the late 1990’s such an important time for Brit music (think Radiohead, Oasis, and Blur). The repercussions of the preferred drug of the time (coke. Lots and lots of coke) as well as the elusive quest for rock immortality drive the wickedly cheeky Stelfox to commit a series of brutal murders. It wouldn’t be a rock movie without the sex part of “sex, drugs, and rock & roll” and it wouldn’t be on Mr. Man unless we saw some sexy skin! The blue-eyed Nicholas Hoult has one of the hottest lean bods in the biz, and doesn’t mind showing off his tight little ass! In addition to baring cheek, Hoult has his boy bit debut when he flashes some back sac at the 1 hour, 29 minute mark! The fact that Edward Hogg joins in on the buns makes this a can’t miss Man flick!