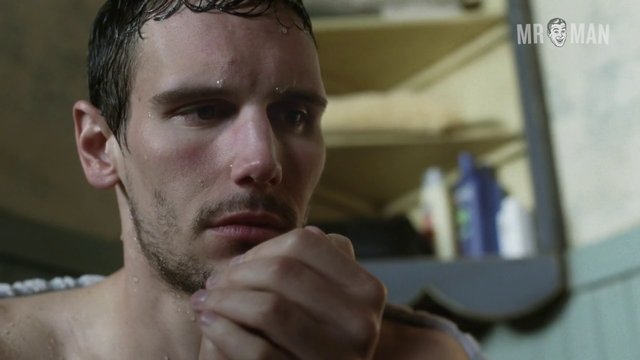 Olive Kitteridge (2014)
Sexy, shirtless Ep. 01x02 | 00:11:15 Cory shows off his shirtless physique as he enjoys a shower. During a moment of contemplation, he sits in a chair, wearing nothing but a towel.
advertisement

Based on the Elizabeth Strout novel of the same name, Olive Kitteridge (2014) is a four-episode HBO mini-series that follows the titular character (Frances McDormand), a stern and sharp-tongued Maine math teacher as she interacts with her pharmacist husband, Henry (Richard Jenkins); resentful son, Chris (John Gallagher Jr.); and a wide swath of members from their community like Denise (Zoe Kazan), an insecure clerk that works at Henry’s pharmacy; Jack (Bill Murray), a fellow teacher, widower, and kindred spirit; and Suzanne (Libby Winters), Chris first wife. Spanning twenty-five years, we get a view of Olive pragmatism and stoicism as she negotiates the world through the heavy haze of depression. In the second episode, Cory Michael Smith takes an emotional walk down memory lane while showering, which ultimately gives us a look at his naked torso. Cory will have your Kitteridge tingling!