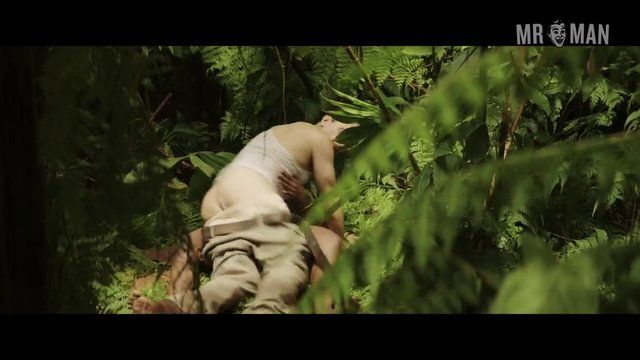 Palm Trees in the Snow (2015)
Nude, butt, straight 00:22:20 Luis Callejo does some poon pummeling in the forest with his nice white ass on full display!
advertisement

The sweeping Spanish epic Palm Trees in the Snow (2016) seeks to tackle the storied colonialism of the country during the mid 20th century. Our window into the brutality of island life under the rule of Spain is told through Clarence (Adriana Ugarte). The young woman discovers evidence that her uncle Killian (Celso Bugallo) sent mysterious letters to a family on Fernando Poo island. This discovery takes us through a series of flashbacks that unravel the involvement of Clarence’s family with plantation life for indigenous tribes. Palm Trees in the Snow is a hit with the critics, and is a slam-dunk with us here at Mr. Man for its butt bonanza!  The sexy Djédjé Apali is shirtless throughout the flick, and shows off his ass in three juicy scenes. Make sure to keep your eyes peeled at the 1 hour, 17 minute mark where he shows some dong! Add in a little shirtless action from Mario Casas and Snow will make you blow!