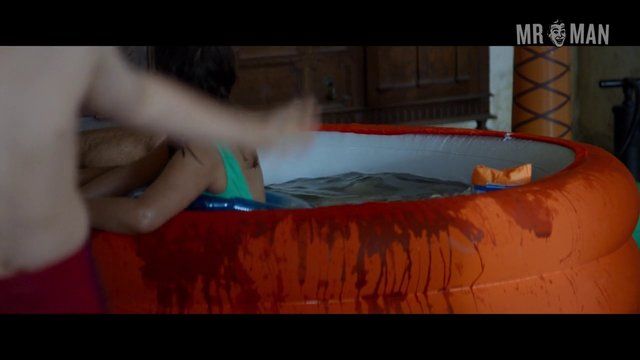 Partisan (2015)
Sexy, shirtless, bathing suit, bulge 01:06:36 A hot and hairy Vincent Cassel hangs out with the kiddies while sporting a sexy speedo!
advertisement

Australian director Ariel Kleiman made his first feature film—Partisan (2015)—and got none other than French stud Vincent Cassel to play his lead character, Gregori. Gregori runs a commune and oversees a network of child assassins who do his bidding. Freaky stuff! Cassel sports a salt and pepper beard, though, and totally pulls the look off, having not lost any of his looks with age. He sports a small black swimsuit in several scenes about an hour into the film, and with that a Vincent Cassell-in-a-small-black-swimsuit-shaped hole in our hearts that we didn’t know existed was filled! He’s squatting down close to the ground while he eats at a couple of points, and then in one instance stands up abruptly and walks directly toward the camera, giving us a good look at his big bulge. He shows his tanned, toned bod off even more when he blows up an inflatable palm tree.