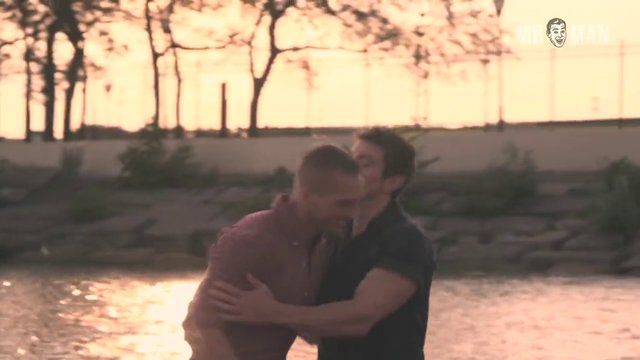 Stay (2013)
Sexy, gay, shirtless 00:04:12 The insanely sexy Grand parties with his peeps in Chicago and does some spit swapping with a hot guy. Talk about fun in the sun!
advertisement

When Steve Grand came about (and came out) both the country music world, and the LGBT community were rocked to their cores. A gay country music singer was shocking to what people thought about country music. For that matter, a country artist was shocking to what people thought about gay musicians. But it turns out the marriage of gay and country go together like fireworks on the Fourth of July. Or perhaps hot dogs on the Fourth of July? In any event, the delicious blend has never been more evident than in the music video for Grand’s hit single “Stay”. A toe-tapping country music video has never looked so good. You’ll see Chicagoland native Steve Grand having some fun in the sun with a group of friends, one of which is an insanely hot blonde boy-toy. The fun and carefree attitude of the group allows Steve to steal more than a few smooches from this blond babe. The group ends up at the lake, and Steve ends up tackling his friend in the water. Somehow they resurface shirtless, now that’s some music video logic that no one will complain about. Also seen shirtless in bed, Steve sings “Why don’t you stay with me?” You wouldn’t have to ask us twice!