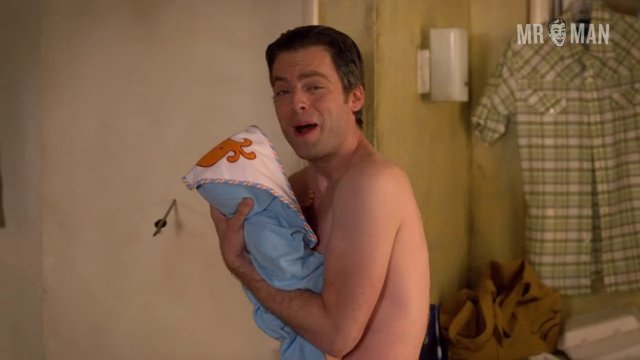 Weeds (2005-2010)
Sexy, shirtless Ep. 06x05 Justin cradles his baby in the buff. With a crowd gathering, he cradles his junk in his hand.
advertisement

When Nancy Botwin’s engineer husband drops dead from a heart attack on the hit Showtime satire Weeds, she’s left with a big house in the suburbs to pay for, a maid’s salary to maintain, and two sons to raise. But instead of becoming someone’s secretary, Nancy goes into sales—pot sales, that is. While she’s trying to hide her new business from her family and nosey neighbors, she’s helping the rest of the neighborhood, including city councilman Doug Wilson (Kevin Nealon), toke up.

Nancy may be the pivotal character of this series, but all the guys of Weeds get in on the action and the nudity. In Episode one of Season 3, Nealon and Andy Milder both fire up a gluttial glimpse while trying to settle the old “whose banana is bigger?” bet.  There’s no look at their mandanglers, but their bottoms both are prize winners.  Former “Saved By The Bell” heartthrob, Mark-Paul Gosselaar pops up in one episode as a randy bartender who gives Nancy a rough night of carnal delights.  When she attacks his pants and pulls them down, his skinificent seat is exposed and active as he thrusts into his conquest.  Other fine pieces of man candy can be found throughout the series.