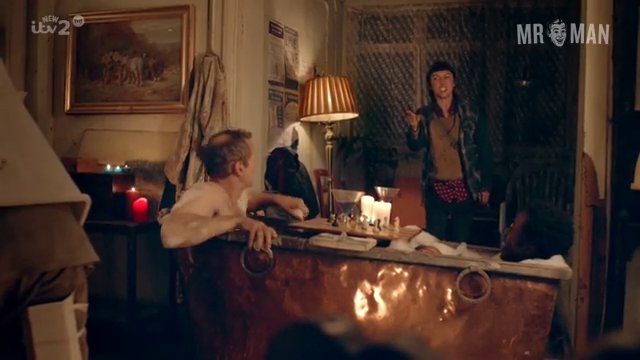 You know what the boob tube is missing? Yes, how did you know! It’s missing a post-apocalyptic romcom. Not anymore. Thanks to the British boob tube channel ITV2, their newest show Cockroaches has filled the void. The show commences with nineteen-year-olds Tom and Suze (Daniel Lawrence Taylor and Esther Smith) drinking beer and dancing to a horrible tune. When they receive word that a nuclear attack is imminent, they decide they should spend their last days on Earth fucking, because that is what we’d all do, right? Right. Fast-forward ten years later, the fornicating couple have survived the nuclear holocaust and now they find themselves hampered by a nine-year-old daughter, Laura (Jessica Emily Rose). Life’s a bitch. Now the three of them roam the wasted remains of England, finding survivors, food, and shelter, while trying to be parents and maintain their relationship. It’s not a complete wasteland, thanks to a pleasantly pleasing look at Alexander Armstrong’s bathtub bunnage in season one, episode four. Too bad he didn’t show us his cockroach.