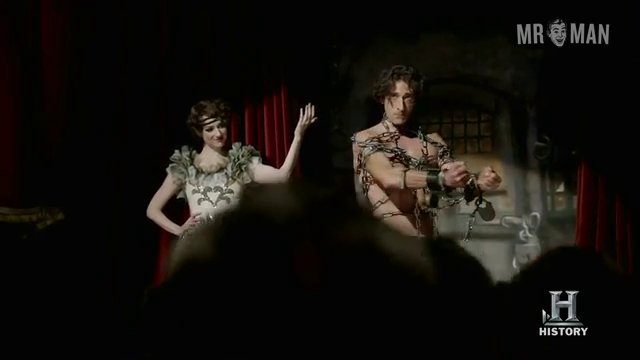 The boob tune mini-series Houdini follows the titular death-defying escape artist (Adrien Brody) from his birth in Budapest to his birth as the greatest magician/illusionists to ever live. See Houdini’s career really take off when he hires an assistant, Jim Collins (Evan Jones), the gifted craftsman and inventor of his various devices including the Chinese Water Torture Tank. In between wowing audiences, Houdini works his magic on his dame Bess (Kristen Connolly), making his dink disappear inside of her. More importantly, the escape artist sets on a path to debunk fake spiritualists and other con artists. Adrien Brody shows off his fine physique, flashing underwear bulge and abs in multiple scenes of illusion and magic. Abracadabra! Mr. Man would like to make Brody’s clothes disappear!