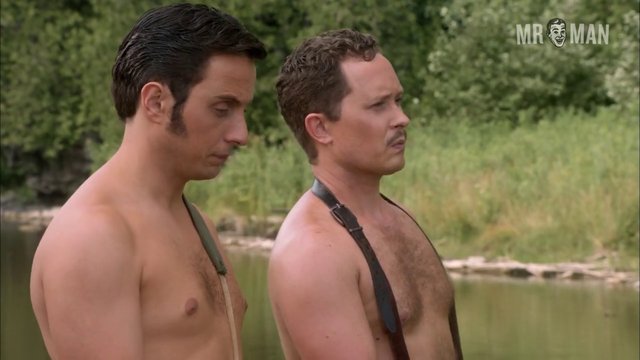 Murdoch Mysteries (2008-2016)
Sexy, shirtless Ep. 06x05 | 00:26:54 There's nothing silly about Tilley's adorable bod and the gorgeous Harris as they hang out with their poles out.
advertisement

Set in the 1890’s Murdoch Mysteries (2008 - ) tells the story of one William Murdoch (Yannick Bisson) a detective who breaks ground using science to help solve cases. Putting to use fingerprinting, lie detectors, and trace evidence long before they were accepted science, Murdoch is able to solve the cases that others can’t.

There is plenty of eye candy spread throughout this series including Ryan Tilley and Jonny Harris who live at a nudist colony. We see them standing on the bank fishing with their fishing reels covering their junk. We still get them shirtless and looking hot as they hold their rods. Patrick Garrow gets in on the nudist colony good time when he walks by nude and shows off his ass. A little later Patrick is back in asstasic mode when he interrupted by Murdoch while he shaves. We get a great view of his nice ass as they debate about a dead body.