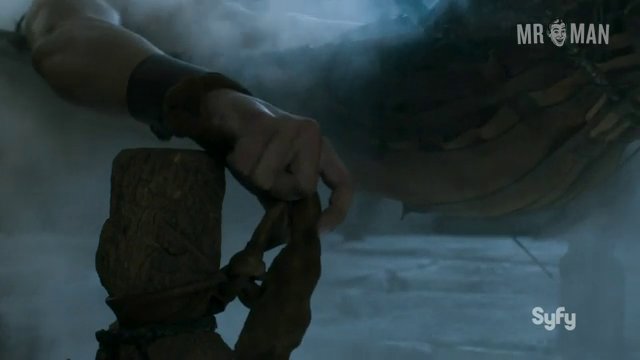 Olympus (2015)
Sexy, shirtless Ep. 01x02 | 00:01:09 Tom proves that he's been working overtime in the gym, showing off his ripped physique why getting tortured and probed.

Set in Ancient Greece, the Syfy network fantasy drama series Olympus builds around Hero (Tom York), the young, handsome son of King Aegeus (Graham Shiels), an arrogant and aggressive fellow, who is filled with rage when he discovers that Hero is the holder of the Lexicon, the secret code that allows man to enter Olympus. It seems as though King Aegeus thought he held the powerful key. To make matters worse, the King’s wife, Medea (Sonita Henry), wants the hidden code, and so does the King and Queen’s son, Lykos (Wayne Burns). Looks like Hero better watch his back! Throw in a bunch of other gods and monsters and various battles, and we’ve got one heck of a television show. On season one, episode two, Levi Meaden and Wayne Burns share a same-sex smooch. Also, Tom York shows off his ripped body while being tortured. The fact that York doesn't get completely nude is torture enough!