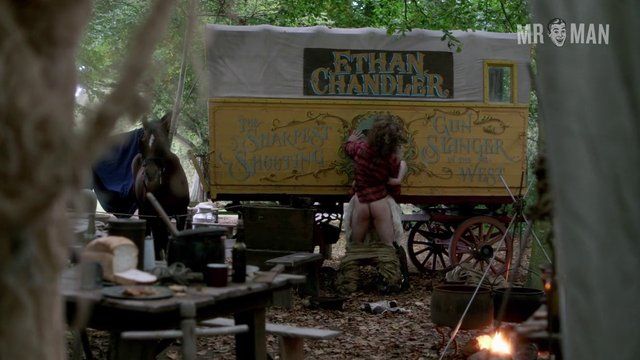 Set in Victorian London, the Showtime series Penny Dreadful is a psychological thriller that brings together some of literature’s most enigmatic and popular characters, including Dr. Victor Frankenstein (Harry Treadaway), Dorian Gray (Reeve Carney) and several memorable figures from “Dracula” and interjects them into the darkest and most secret corners of society where they cross paths with mysterious individuals like Sir Malcolm (Timothy Dalton), an obsessive and manipulative individual on the search for his missing daughter; Josh Hartnett as Ethan Chandler, a mustachioed sharpshooter that serves as Vanessa Ives (Eva Green) hired muscle; and Semene (Danny Sapani), an intense dude with a dark and arresting gaze. The debut episode alone gives us full frontal and butt from Alex Price, along with some brief butt from the always hunky Josh Hartnett, but the show has been anything but dreadful when it comes to male nudity. Simon Russell Beale bares his butt when he gets choked by a woman during a sex scene, while Reeve Carney gives us episode after episode of action, showing butt during hot gay and straight scenes. Ronan Vibert bares his buns during an intense flogging, Rory Kinnear makes a bloody, naked debut as a monster and we even see backsack from Josh Hartnett! Jonny Beauchamp really gives us our money's worth in Penny by shedding his gown to reveal a thick cock! We're not sure what else Penny Dreadful has down its pants, but we can't wait to find out.