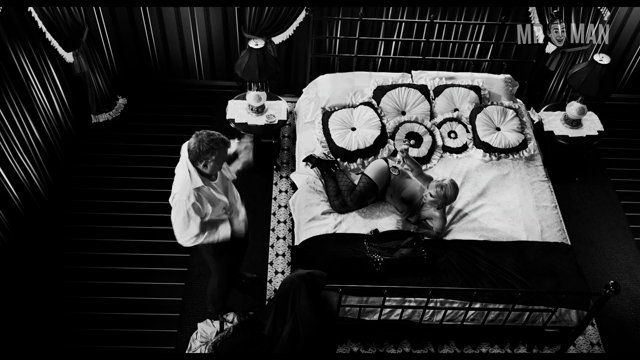 Sin City: A Dame to Kill For (2014)
Nude, butt 00:22:00 Ray gets undressed, bangs his babe, and teases a look at his tail peeking out from under his t-shirt. Who leaves their shirt on during sex?

The graphic novel-based thriller Sin City: A Dame to Kill For (2014) is the long-awaited sequel to Sin City (2005), the film that first brought director Robert Rodriguez and famed comic book writer Frank Miller together. The film features three more classic stories from Miller's Sin City chronicles and a couple new ones, and it also brings back some fan favorite characters like Nancy (Jessica Alba), Gail (Rosario Dawson), and Marv (Mickey Rourke), as well as introducing some new characters like Bertha (Lady Gaga), Ava Lord (Eva Green), and, of course, Dwight (Josh Brolin). The gritty sequel teases just enough flesh to get you excited. We get an aerial view of Ray Liotta’s buns as he thrusts into a lucky lady. More notably, Josh Brolin gives us a look at his rump and peen during a bedroom scene. These are two dudes we’d kill to see more of!