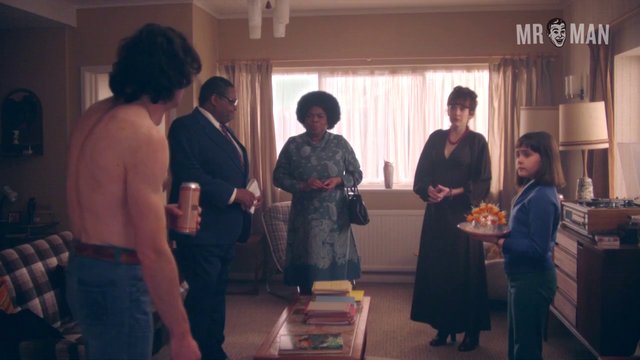 The Kennedys (2015)
Sexy, shirtless Ep. 01x01 | 00:19:42 Harry Peacock plays a sexy 70's dude who gets down with his bad self in front of his neighbors. There's nothing sexier than his thick chest fur and ripped bod. Groovy!
advertisement

What is it about the quintessential 70’s guy that’s so hot? Could it be the hair? After all he’s got the dark, thick layer of chest fuzz (always a win), he sports an equally thick mustache that’s to die for, and he’s got a moppy head of luscious locks to boot. Or, could it be the fashion? The quintessential 70’s guy isn’t afraid to rock a pair of groovy bellbottoms. No matter what the case may be,  BBC One’s The Kennedys star Harry Peacock gives us a heaping dose of retro thirst as he embraces all the manliness of the decade in a sexy scene that sees him dancing around the living room without a shirt.

Oh, the plot. (Sorry, we were distracted by Mr. Peacock). The Kennedys follows a formerly lower-class British family that recently found a sense of success by securing a spot in a ubiquitous, cookie cutter middle-class neighborhood. Filled with pride, the family does everything they can to climb the community's social ladder, ultimately working to organize the first ever estate dinner party. The show is a six part miniseries loosely based on the life of British TV personality, Emma Kennedy. Hopefully the hairy Harry gets a spinoff, so we can continue to get funky with our bad selves!