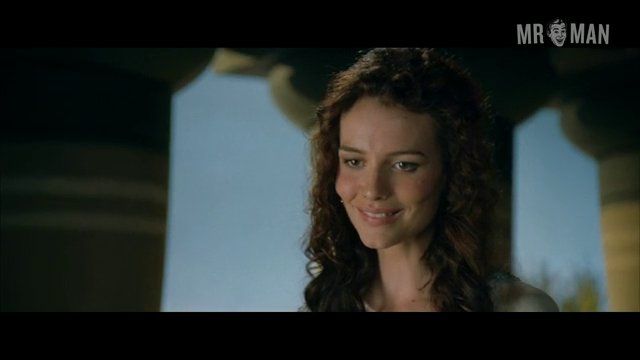 Troy (2004)
Sexy, shirtless 00:46:18 A hunky Eric Bana cradles a child in a tender moment of fatherhood. The death knell of war interrupts the bonding moment.

Troy (2004) is the quintessential Greek tale of men fighting the good fight for tail. When Prince Paris of Troy (Orlando Bloom) woos Helen (Diane Kruger), the Queen of Sparta, away from her hubby Menelaus (Brendan Gleeson), the competing kingdoms go to war over her whoring. All is fair in lust and war, with Diane Kruger as the prize.

You’ll be fighting off your own trouser trojan war after seeing these three Greek heroes exposing themselves.

Helen’s face supposedly launched a thousand ships.  Brad Pitt, Orlando Bloom and Eric Bana, with their bare chests and buns launch something too ... but it ain’t ships.