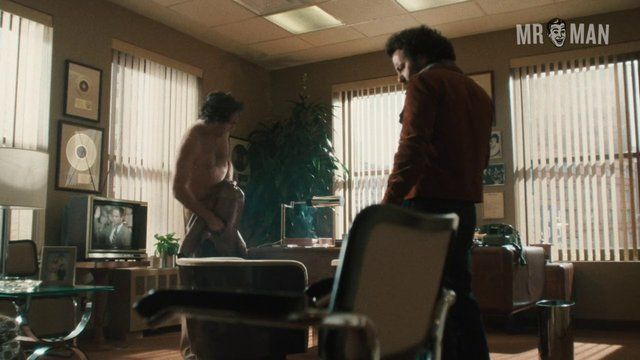 Vinyl (2016)
Sexy, shirtless Ep. 01x02 | 00:12:34 Bobby Cannavale strips off his shirt and shows us his beefy bod before snorting drugs off of a television.
advertisement

Vinyl, a show helmed by the likes of Martin Scorsese and Mick Jagger, debuted on Valentine's Day 2016—a somewhat telling release date, considering the show details Richie Finestra's love affair with music and American Century Records in the 70s. Richie, played by Bobby Cannavale, is the president of the company and is up against a looming buyout and the slow dissolution of a place he loves to work thanks to big-money names and the saturation of shallow pop music. In an effort to save his company, Bobby does all sorts of strange things, like beating up his partners to get out of said buyout, killing a radio host, and telling his staff to seek out musician's whose energy is inspiring instead of monetarily promising. The HBO show, set in New York, is unsurprsingly rife with skin—not only does Bobby do a full frontal scene when he gets out of the shower, but we see plenty of shirtless action from him when he does drugs off a TV. So far, this series is savage and sexy!