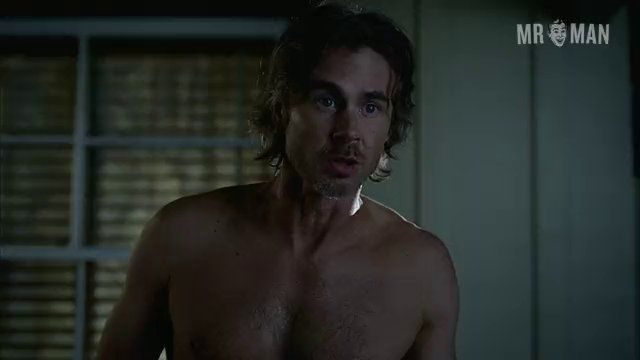 Alan Ball, screenwriter of the Thora Birch showcase American Beauty and the acclaimed flesh-friendly funeral-home drama Six Feet Under, returns to HBO with True Blood. This series takes place in the sleepy town of Bon Temps, Louisiana, two years after vampires have “come out of the coffin” in public. After the invention of an artificial blood substitute called Tru Blood, the vampire leadership launched a PR campaign stating that they simply want to live and work and not suck your blood like any other folk in day-to-day (or sunset-to-sunrise) society. But not all the bloodsuckers are toeing the party line, and there's an army of vampire groupies, known as "fang-bangers", willing to be sucked. Oh, and did we mention drinking vampire blood gets humans really, really high?

(In the most over-the-top Transylvanian accent.) Blah...blah!  Sam Trammell, we want to suck your -- Okay, so we could probably work on the accent.  But what doesn’t need work is Sam Trammell's amazing physique.  Though we never get to fully appreciate the stake dangling from between his legs, his body is to die for. Martin Spaniers, Stephen Moyer, and Joe Manganiello also show off their bodies in this series about raising a stiff one from the dead. Alexander Skarsgård raises the stakes by baring his uncut cock during a surreal scene of snow and fire. Smoking!