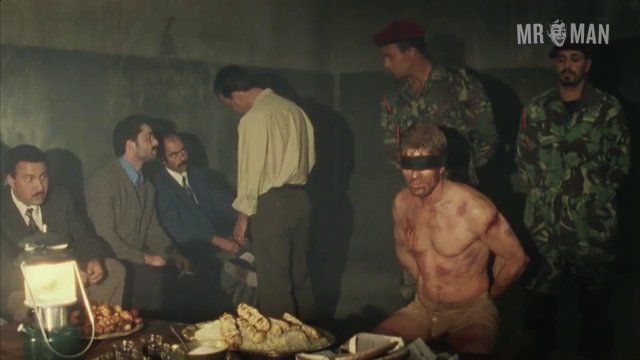 Bravo Two Zero (1999)
Nude, butt, underwear, shirtless, bulge 01:33:47 Sean is stripped by two guards, nicely showing off his butt when he lowers his shorts in front of a group of creepy guys while blindfolded!

Set during the 1991 Gulf War, Bravo Two Zero (1999) is a BBC1 miniseries that tells the true story of Sergeant Andy McNab (Sean Bean) and the SAS Patrol as they go on a secret mission, deep into Iraq, to destroy Saddam Hussein’s arsenal of scud missiles and sever strategic communication lines. The brave British men get in and complete their mission, but that was the easy part. Now, facing overwhelmingly grim odds, the military heroes must escape enemy territory. During a torture scene, Bean drops his underwear to show his captors his foreskin, proving he’s not Jewish. We don’t see the soldier’s gun, but we get a quick glimpse of Bean’s military rear. War is ugly, but Bean’s bottom is beautiful.