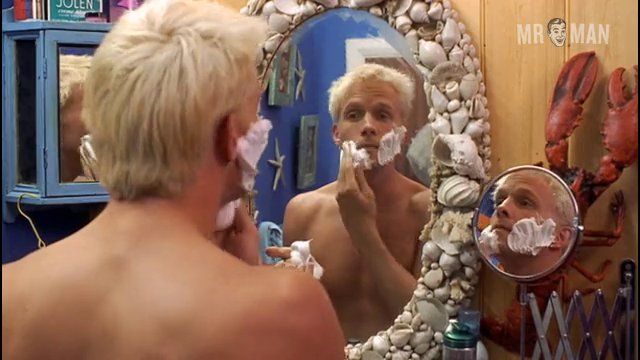 Virtual Sexuality (1999)
Nude, butt, shirtless 00:23:52 Mirror, mirror on the wall. Rupert is the handsomest of them all. Gotta love that butt.
advertisement

In the British comedy Virtual Sexuality (1999), Justin (Laura Fraser) is a frustrated seventeen-year-old virgin, itching to take the plunge. The chaste chick has her eye (and hopefully her crotch) on Alex (Kieran O’Brien), one of her classmates. With the help and advice of her friends Fran and Chas (Marcelle Duprey and Luke de Lacey), Justin is plotting a way to get into his pants. When her date with Alex gets cancelled, Justin attends a computer convention where she fiddles with a virtual reality machine, designing her dream date. After an unexpected explosion, the man-making machine spits out Jake (Rupert Penry-Jones), the dude she was designing before the accident. After a hilarious mix up, Jake creates confusion and catches the eye of Hoover (Natasha Bell), Justin’s archenemy, further frustrating the forever virgin. The stereotypical high school locker room scene in this comedic flick delivers an ample harvest of naked boys with their swing toys. Rupert Penry-Jones and Kieran O’Brien steal the show with full-frontal fun. Virtual Sexuality will make you wish you were in high school again.