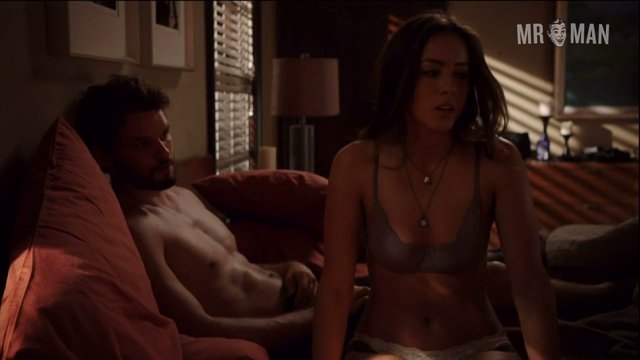 The comic book blockbuster film The Avengers (2012) gets another life on the small screen in the ABC series Agents of S.H.I.E.L.D. Agent Phil Coulson (Clark Gregg) has survived his apparent death in the movie, and is now forming a fresh team of S.H.I.E.L.D. agents to investigate superhuman events. There’s weapons expert Melinda May (Ming-Na Wen), black ops specialist Grant Ward (Brett Dalton), tech engineer Leo Fitz (Iain De Caestecker), life scientist Jemma Simmons (Elizabeth Henstridge), and hotshot hacker Skye (Chloe Bennet), all ready to have their gumption tested in the field. The team may be investigating superhuman activity, but the real phenomenon is the super hotness of the S.H.I.E.L.D. stars! There’s not much chance to see skin on ABC, but Austin Nichols does us a solid and shows off his chiseled chest in season one, episode five. We get some more sexy, shirtless action from Brett Dalton, J. August Richards, Nick Blood, Luke Mitchell, Jason Glover, Henry Simmons, Jason O’Mara, John Pyper-Ferguson, and Zach McGowan. One of our favorite scenes is when the delicious Daniel Zovatto shows off that bodacious bulge to go skinny-dipping! The swim almost ends in tragedy, but the real tragedy is that we don’t get to see more skin from Daniel! We also love looking at Brett’s beautiful bod when he appears in just his underwear, being seduced by a sexy alien in season one, episode fifteen. Now we know why nerds love comic book-related shows so much!