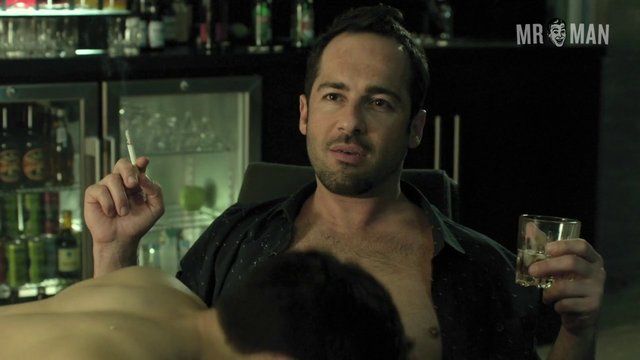 What do you do when being a party boy has made you famous and you can no longer party? That is the dilemma faced by the title character in Ruben Guthrie (2015). Ruben (Patrick Brammall) is an advertising exec who is at the top of his game. He has a beautiful house, gorgeous fiancée and a party boy lifestyle that has made him famous. After a heavy night of drinking he nearly drowns in his pool. His mom wants him to go to rehab and his fiancée leaves him, but not before giving him an ultimatum. If he can stay away from drinking for a year she will take him back. Can he give up the life that made him famous for love, or would he rather leave her behind and move on?

Alex Dimitriades will have you drunk on his good looks when we first see him drinking wine while having a conversation with his shirt unbuttoned and some skin showing. A bit later he still has a drink in hand, but now is kicking back and enjoying two guys going down on him at the same time. We don’t see the actual action, but get another good look at his chest and handsome face.