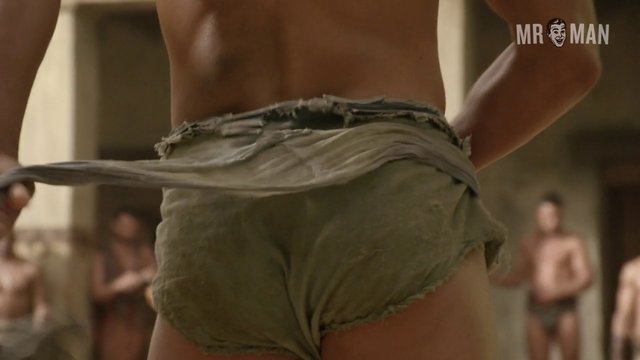 Spartacus (2010)
Nude, butt, shirtless, prosthetic Ep. 01x08 | 00:10:30 The beefcakes of Spartacus show some SpartacASS as they disrobe one by one in front of a crowd!
advertisement

The Starz series Spartacus: Blood and Sand originally starred Andy Whitfield as the eponymous hero who led a famous slave revolt in ancient Rome. Now the sequel season Spartacus: Vengeance has Liam McIntyre replacing him in the lead role. The cast is an emperor’s feast of handsome dudes, featuring John Hannah, Manu Bennett, Andy Whitfield, Eka Darville, and Antonio Te Maioha. Craig Parker bare his butt in season one when he bones his lucky lady, while Andy Whitfield goes full frontal for a racy ritual! Mike Edward joins the party too when he shows a prosthetic penis, Jai Courtney bares his beautiful buns, and Manu Bennett showed balls and butt during a hot sex scene. John Hannah, Ande Cunningham, Daniel Feuerriegel, all disrobe and showcase their derrieres, while Antonio Te Maioha and Eka Darville share a sexy gay kiss to round everything out. With all the sex and naked beefcake, Spartacus: Blood and Sand will leave you with your genitals in your hand!