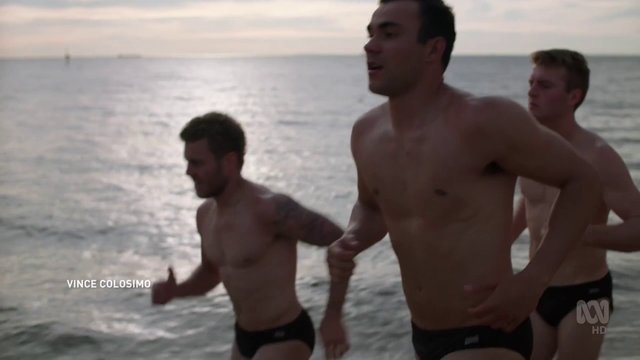 The Warriors is an Australian TV series created by Tony Briggs and Robert Connolly, and starring Gordan Churchill, Reece Milne, and Nelson Baker. This sports drama follows a struggling football club called the Warriors. The series concentrates on three rookie players and a disgruntled pro as they navigate the world of professional sports and recapture the team’s once-great reputation. These foxy footballers certainly have a good reputation with Mr. Man! Rugged redhead Ben Knight gets shirtless and sexy in season one, episode two when he chops vegetables in just his shorts. Those vegetables are raw now, but they’re going to be steamed after being so close to Ben’s hot bod! In season one, episode two we get a super sexy scene from The Warriors. Gordan Churchill, Nelson Baker, and Ben Knight all get shirtless at 23 minutes to put their built bodies on full display. The guys show off their perfect pecs while holding large spears. Beyond a bevy of other shirtless scenes from all the guys, Nelson dons a thong and later has his towel pulled off to show his tight ass! Ben shows of his own when he injects something into it, then again alongside Reece while the two have photos taken of their dicks! Can we have one??