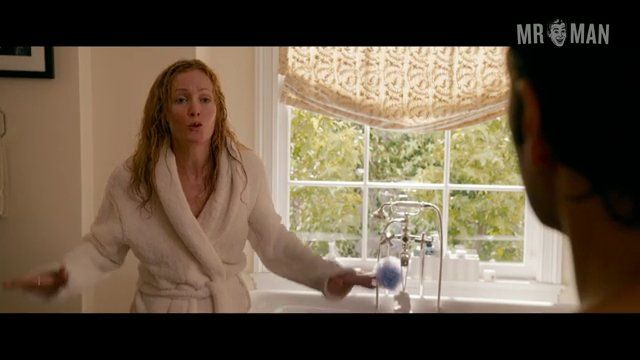 This Is 40 (2012)
Nude, butt, straight, shirtless 00:00:29 Paul Rudd is having viagra sex with his wife while in the shower. See his ass through shower steam, then he parades around with a strategically placed towel.

Knocked Up (2007) is one of Mr. Skin's favorite movies of all time (probably because he's featured fairly prominently in the plot). Now its "unofficial sequel" This is 40 (2012) picks up on Knocked Up's supporting character's Debbie (Leslie Mann) and Pete (Paul Rudd) five years later on the night of Pete's fortieth birthday. While this sequel has all the hilarity of its former, there is no mention of Mr. Skin. Oh, Judd Apatow, why hast thou forsaken us?  You can take comfort, however, in knowing that Paul Rudd is takin' care of  his bod with an obscured booty shot as he checks his anus for... Well, we won't finish that sentence as it isn't Rudd's sexiest moment, but for fans of this handsome funny man, any skin is something to be cherished...even at 40!