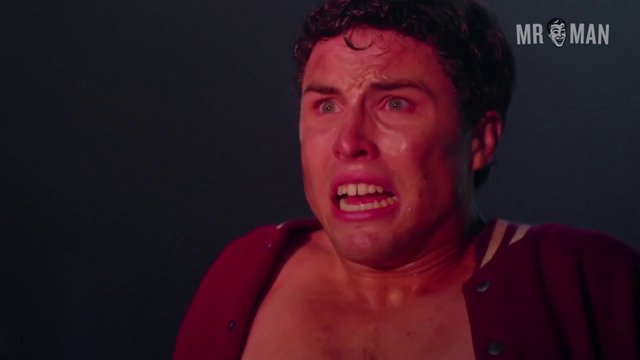 Horror meets humor in the wicked series Ash vs Evil Dead (2015). Ash played by Bruce Campbell has spent the last 30 years avoiding growing up...and also avoiding the terrors of the Evil Dead. All of this changes when a Deadite plague threatens to destroy humanity, leaving Ash as mankind's only remaining hope. For once in his life he has to be responsible and fight evil! It isn't all gory ghouls; we get some tasty nudity in season 2! In season 2, episode 3 tight and toned Taylor Barret is shirtless...while getting his face torn off. Oh well! It was a beautiful face, and a bodacious bod. In episode 3, “Confinement,” we get a look at the juicy Joel Tobeck’s amazing ass when he gets into a bloody altercation with a security guard.  We see that bodacious booty again when he stands naked, covered in blood, talking to a woman in a suit. We’d love to have some confinement with Joel! The rugged Ray Santiago shows some skin in the same episode when he opens up his shirt to expose a rash. Ray gets shirtless again in episode 6, “Trapped Inside,” when he undergoes an exorcism. Ray can get trapped inside us anytime! The tasty and tatted Ray loses his shirt one more time for episode 8 when he appears shirtless performing a disgusting ritual on some poor man. The men of Ash vs Evil Dead are devilishly sexy!