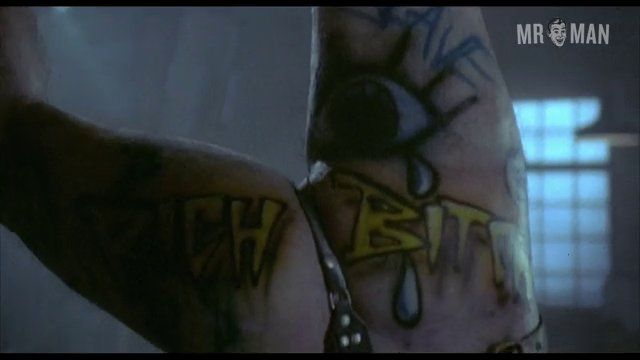 Color of Night (1994)
Sexy, shirtless, thong 01:43:15 Ignore the video game-like soundtrack and get a gander at a shirtless Kevin O'Conner hanging upside down, wearing a frown and a leather thong.

After one of his patients commits suicide which causes him to become color blind, New York psychoanalyst Bill Capa (Bruce Willis) moves to Los Angeles and takes over his friend’s therapy group after the friend is murdered.  Then the fun starts in Color of Night (1994).  Bill is stalked by a killer, while trying to figure out who is responsible for his friend’s murder and how all of it is connected to the beautiful and mysterious young woman who Bill has started an intense sexual relationship with.

Plot is fine, but let’s boil this movie down to three words; Bruce Willis’ penis. You’ll be shouting “yippee-ki-yay” during a pool scene.  Willis’ Bill is pulled into the water and his pants are yanked down by his comely cohort.  We see his bubblicious bottom floating around and what’s that? Yes, its little Bruce bobbing in to say hello.  Willis didn’t die hard in this scene, but his mandangler is moonlighting as a flotation device. Later we see more Bruce butt in a shower scene, but the pool is where things are the most interesting.