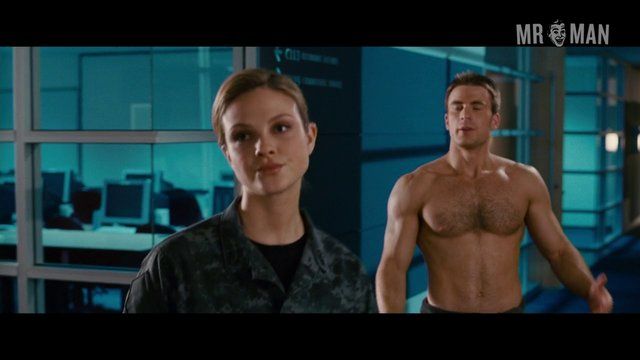 Fantastic Four: Rise of the Silver Surfer (2007)
Sexy, shirtless 00:52:59 Chris Evans flaunts those hairy pecs that you know and love while showing off his super skills to a lucky lady.
advertisement

Fantastic Four: Rise of the Silver Surfer (2007), directed by Tim Story, was the follow up to Fantastic Four (2005) and it marked the return of many of the characters from the first film, and featured the introduction of an antagonist in the form of the Silver Surfer. The titular quartet—made up of several actors who would end up going on to become quite successful apart from the film—has to team up to take the enemy down yet again, and for our money the sexiest one of the whole bunch is Chris Evans, who of course would go on to become best known for portraying Captain America. In one scene in particular, he’s walking around without a shirt on, and we see what’s practically a shirt made of hair covering his, ripped chest. He uses some of his super abilities at one point, and it’s played for laughs, but this is one seriously hot scene if you ask us!