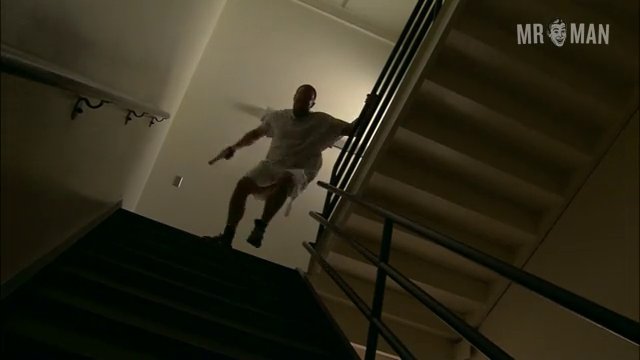 Hitman Chev Chelios (Jason Statham) does a job for his boss. The fallout from the killing proves too much for the boss to handle, so in an effort to get rid of Chev, he hires another goon to punch Chev’s ticket.  Chev is injected with a poison that will kill him if his heart rate drops past a certain level. Chev has to keep his adrenaline pumping while wreaking havoc and exacting revenge in Crank (2006).  This is one cardio exercise that can’t be done on a treadmill.

Jason Statham is the quintessential bald, buff badass. He’s known for kicking ass more than showing it, but he allows us a few glimpses of his muscular backside here.  Early in the movie, he wakes up in the hospital dressed only in one of the always flattering gowns.  We see some hip and butt as the gown flaps in the breeze.  Later in an attempt to keep his heart rate (and other things) up, he has sex standing in the middle of the street. His shirt stays on, but his pants drop, giving us another view of his cardio craving crack.