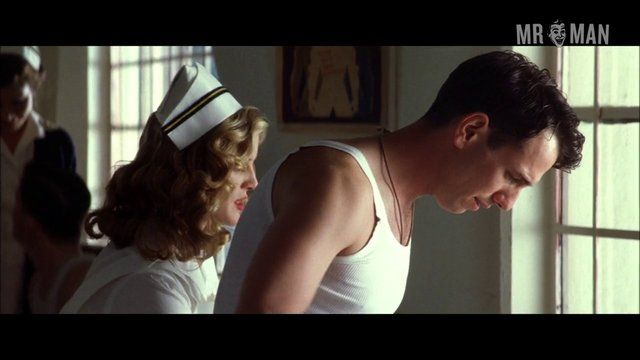 Pearl Harbor (2001)
Nude, butt, shirtless Ewen Bremner gets an injection in his ass while making some pained faces. Hm, reminds us of something. He then walks across the clinic with some choice coin slot on full display!
advertisement

Michael Bay’s sweeping epic Pearl Harbor (2001) brings the drama, bravery, sacrifice, and hot Navy dudes of World War II to the big screen. Trading subtlety for his patented no holds barred filmmaking technique, Bay tells the story of boyhood buds Danny Walker (Josh Hartnett) and Rafe McCawley (Ben Affleck) who are eager to serve their country during a time of turmoil. The horrors of war have a way of getting the best of friendships, however, and with some major girl drama it takes a reunion in Hawaii to bring our two boys back together. The big budget period flick, which won an Oscar for Best Sound Editing, could definitely have shown more of what these boys do behind the scenes. Thankfully it still delivers with some looks at the stunning Josh Hartnett and his athletic bod, as well as bod from Cuba Gooding Jr. and ass from Ewan Bremner! Pearl Harbor? We'd rather have a necklace, boys!