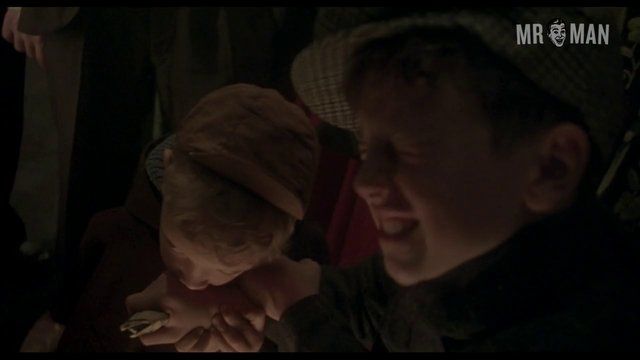 The City of Lost Children (1995)
Sexy, shirtless 00:05:15 A rippling Ron Perlman is chained up in front of a crowd of people before breaking free to save a man.
advertisement

The 1995 Cannes Film Festival started off with a bang when they kicked off the festivities with The City of Lost Children (1995). Jean-Pierre Jeunet, the French director behind Delicatessen (1991) and Amélie (2001) cooked up this nihilistic nightmare along with frequent collaborator Marc Caro. The movie follows One (Ron Perlman) as he attempts to rescue his adopted little brother from a kidnapping. The little lad was taken by a mad scientist called Krank (Daniel Emilfork), who takes children to steal their dreams, but it was Ron that was cranking fans up a notch. Though the French film stars Ron Perlman, he was the only American on set and spoke not a word of French. However he was able to memorize and repeat enough lines to get him through. But his shirtless scene transcends all language barriers. Chained up and bare chested, we see the gentle giant grow decidedly ungentle. Breaking free of his chains like King Kong, it's a shame we don't catch a glimpse of his king dong. The Sons of Anarchy star then rescues a man in need of help. Heroic too? What more could you ask for? Apparently Ron was bitten by a dog during filming, luckily the injury wasn't serious. Fans of Perlman were bitten by a lovebug during viewing, and sources say it could be fatal.